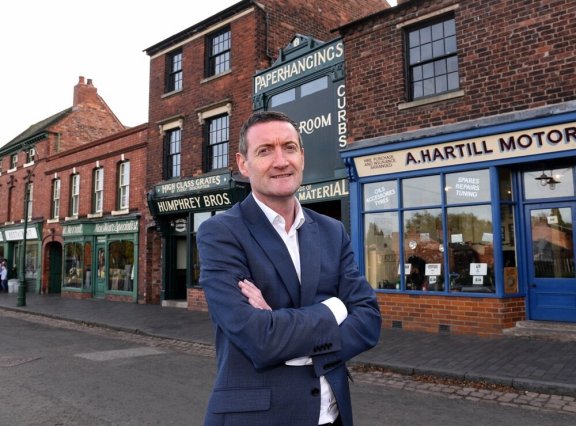 AIM Chair and Director of Black Country Living Museum, Andrew Lovett, was awarded an OBE in the recent New Years’ Honours announcements. Recognised for his services to Cultural Heritage, particularly during Covid-19, Andrew is among several figures from the sector named in the New Year announcements.

“The Board of AIM put their trust in me when they elected me Chair in 2019, and I took the hint to do the very best I could for our members. That was thrown into sharp relief by the pandemic, when many beloved museums and heritage sites were facing bankruptcy.

At that time of crisis, I characterised the alternative to swift public-sector investment as a ‘messy fire-sale of assets, peoples’ lives and their communities.’ We are all here to thrive, not just survive. For visitors. That is the return on investment. It seems to me, this honour simply reflects the value people attach to their museums – especially museums that enjoy and thrive because of their independence. I am very grateful for, and humbled by, the appreciation shown for the part I was privileged to play, allowing a future to be seen.”

“So pleased to see Andrew recognised for his extensive services to museums and culture, and particularly the role he and AIM played in supporting, representing and protecting the sector during Covid.

People can be nominated for honours by anyone and AIM is keen to support nominations celebrating the breadth of great work in independent museums and heritage.

Honours nominations are submitted to a committee which makes decisions on awards: for museums and heritage this is usually the Arts and Media Committee, currently chaired by Rupert Gavin, Chair of Historic Royal Palaces.

An important element of making a nomination is showing how the nominee has made an individual and unique contribution to their community and the nation by going above and beyond the demands of the job.

For more detail on making a nomination visit the UK Gov pages.