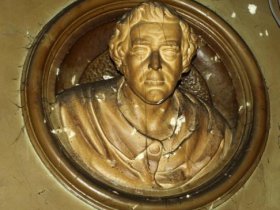 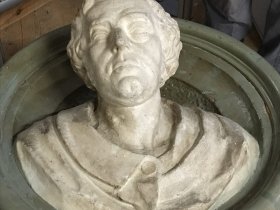 The focus of Menai Heritage Museum is the two famous bridges across the Menai Strait – Telford’s Suspension Bridge and Robert Stephenson’s Tubular Railway Bridge. The accredited, self-funded museum is run by volunteers.

The heavy, sandstone portrait medallion of Robert Stephenson was rescued from the Railway Institute in Bangor, immediately prior to its demolition. This Institute was built by the London and North Western Railway company in 1898, and Stephenson’s head fixed high in the wall of the Reading Room, as confirmed by a newspaper report of the opening.

Menai Heritage accessioned the medallion to be a future attractive item in the display about Stephenson’s Tubular Railway Bridge, but conservation of the head and its wooden surround was a priority. Our successful application to AIM Pilgrim Trust made this work possible.

The conservation was undertaken by Kieran Elliot of Elliott and Ryder Conservation. Layers of paint on the stone head and wooden frame were carefully lifted and analysed. They provided very interesting historical evidence of the head and were greeted with amazement by the team. There is a much more 3D effect now – the waves in his hair and the folds of his clothing all make the relief of the carving visually appealing.

The medallion is now returned to a safe holding place in the museum whilst awaiting a permanent display. To have this carved portrait on display locally is of great importance as it links present day visitors and local people alike with the past of a railway in its earlier days but which is still in use today.

Julie Stone on behalf of Menai Heritage Trustees, volunteers and members of the Railway Institute, Bangor.