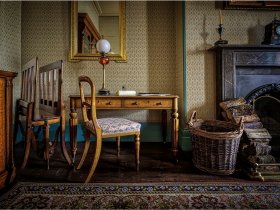 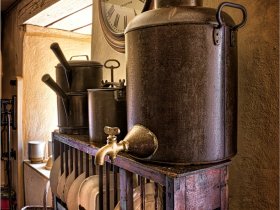 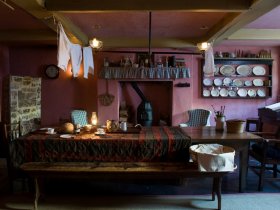 The Judge’s Lodging’s life as a working building ended in 1990, after being the setting for legal matters of Radnorshire (now central Powys) since the 1820s. Left with much of its original furnishings in the Grade 2* building, it was extensively restored to open as a museum in 1997. With working gas and oil lighting throughout, and a hands-on policy, visitors can immerse themselves in a Victorian house, exploring upstairs and down, making their way eventually to grim cells and a vast courtroom.

The grant covered the restoration of five clocks to working order. Three of these are wall clocks purchased in the 19th century for the building; two from Charles Millichamp, Clock & Gunsmith, just 100 yards away, and the third from W. Harris of Knighton, the neighbouring town.  A 19th century longcase clock by Williams of Brecknock and a French mantel clock came into the building later.

The premise of this project was to bring ‘Time’ back to the period rooms – to return an authentic a background sound, enabling visitors to further immerse themselves in the Victorian world portrayed.  This became a particularly pertinent goal as the pandemic took away the usual visitors’ experience of touching period furnishings and more importantly, discouraged the use of the usual sound tour on personal handheld devices, which would normally create an atmosphere and without which, the house is silent.

Work was undertaken by Tom Parry: Antique Clock Restoration & Conservation. He worked with museum staff to hang the wall clocks, one of which had not been on display in the building in its ‘museum’ incarnation before, and another which he helped identify a position to enhance its protection from environmental issues.  He gave full training on basic maintenance to staff and a designated volunteer, whose task it is to check and wind them weekly.

The difference this project has made to the atmosphere of the building is striking (quite literally with three of them!) – low-level ticking and regular chiming can be heard throughout the three floors. Visitors love watching the weekly ritual of their winding and engaging with us in reminiscences about family clocks – time is something we can all relate to.