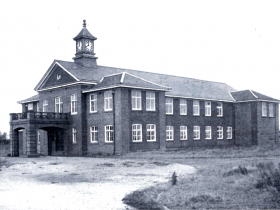 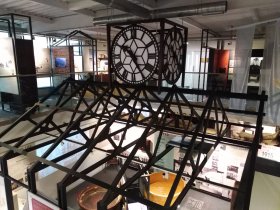 The Devil’s Porridge Museum was established 25 years ago to share the story of HM Factory Gretna – the greatest factory on earth in World War One.  30,000 people were employed here at its height including 12,000 women.  The Museum was established by a group of volunteers with an enthusiasm for local history and in its comparatively short life its growth and development have been incredible.

At the end of World War One, the Factory closed.  One of the only surviving buildings was the Central Headquarters, Mossband House, but it fell into a state of disrepair and was demolished.  Volunteers from the Museum tried to save the building but were unsuccessful.  However, the clock which used to sit on top of it was saved and came into the Museum’s care.  Our project has been to restore this clock and find a home for it within the Museum in a permanent new display.

Our volunteers and Trustees have discussed for many years what to do with the clock and we eventually settled on a plan to install it within the building on top of our Factory display.  The clock now looks like it is sitting on top of a Factory building again – we haven’t just restored it physically, we have ‘put it back where it belongs’ in every sense.  We were able to secure Smith of Derby for this work; the clock was originally made by this company 104 years ago so having them restore it was fitting.

The clock was unveiled on Armistice Day 2020 in a small ceremony broadcast live via Facebook and Youtube Live.  We have also appeared on our local TV and radio stations and had an article about the restoration published in Museum Crush.

The outcomes of the project are many: increased publicity and awareness of the Museum (needed more than ever due to the uncertainties caused by COVID-19), a fantastic new historical display, a significant historical object no longer languishing and deteriorating behind the scenes and an object which enables us to remind people that HM Factory Gretna was an Anglo-Scottish endeavour.  The clock was a well-known local landmark on the English side of the border and it is the first significant object from the English side of the Factory to be incorporated within the Museum.

“Receiving funding from AIM Pilgrim Trust has enabled us to complete a project we’ve been working on for years.  We’re so glad to have been able to restore a 104 year old clock from World War One and to use the original clockmakers for the project was fantastic.  Our new Mossband Clock display looks great and is helping keep the Museum in the public eye: ensuring that the work done by the men and women of HM Factory Gretna to turn the tide of the War is not forgotten.”

Pictured: Mossband House, the central HQ for HM Factory Gretna in World War One with the clock on top, and the restored clock on display within the museum