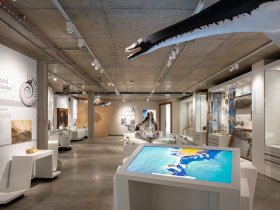 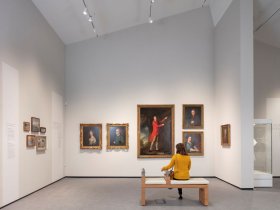 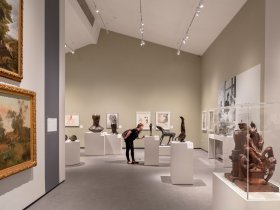 Dorset Museum, based in the county town of Dorchester, has just reopened its doors to the public after a £16.4 million redevelopment.

The Museum, which holds a collection of around four million objects, has set out to establish itself as a major new cultural destination in the South West attracting more than 100,000 visitors per annum.

The origins of the Museum are deeply rooted in local history. In 1845 the Dorset poet, William Barnes, Revd Henry Moule and Revd Charles Bingham decided that in light of Isambard Kingdom Brunel’s construction of the railways through Dorset, and the discovery of specimens and artefacts along the route, that it was “advisable to take immediate steps for the establishment of an institution, containing a Museum and Library for the County of Dorset”.

The Museum had early homes in a variety of unsuitable premises around Dorchester until 1883, when its permanent home in High West Street was designed by the local architect G. R. Crickmay. This building has undergone much change over the decades, but none have been bigger than the recent redevelopment, the ‘Tomorrows’ Museum for Dorset’ project. Delivered by a small staff team of 18 FTE, supported by over 200 volunteers, this has seen a completely new extension added to the historic building. This houses four new permanent galleries, GIS compliant temporary exhibition space, library, café, shop, dedicated learning centre, and community spaces, as well as the Collections Discovery Centre – which contains a publicly viewable store and conservation studio.

As a result, more of the Museum’s internationally significant collections of archaeology, art, literature, geology, natural and social history are on display than ever before. Reimagined galleries have been designed to inspire, with Dorset’s stories creatively interpreted using objects, hands on interactive displays, and stunning audio-visuals. These are all contained within an architecturally striking, ecologically sustainable building. Careful thought to access has been included throughout, with a Changing Places Toilet and autism-friendly Calm Space, along with tactile trails across the galleries, the provision of Sensory Backpacks, and AV presentations designed to include BSL and sign language from first principles.

Galleries include Natural Dorset which reveals Dorset’s geology, landscapes, habitats, and wildlife. People’s Dorset begins with the story of the Palaeolithic, travelling across half a million years of human history, through Bronze age gold, finds from Iron Age Maiden Castle, right up to the development of nuclear technology at Winfrith in the post war era. The four themed rooms in Hardy’s Dorset draw on the world’s largest Thomas Hardy collection, which is on the UNESCO Memory of the World Register. Artists’ Dorset has a display of sculptures, prints, drawings, textiles, and fine decorative art all shown to stunning effect and includes sculptures and art by Elisabeth Frink.

The project has been possible thanks to contributions from many donors including a £12.4million grant from the National Lottery Heritage Fund, £750,000 from Arts Council England and £500,000 from the Garfield Weston Foundation. The build also brought together several key players including Dorset-based firm Acheson Construction, who built the new extension. Real Studios’ have developed the Museum galleries with Dorset’s stories and the Museum’s collection cleverly interpreted. These galleries were then brought to life by exhibition fit out specialists ‘The Hub’, working closely with Elbow Productions, RAE Models, Colin Lindley, and Out of the Blue Fabrications.

Professor Andrew Fleet, Chairman of the Dorset Natural History and Archaeological Society, the charitable trust that owns the Museum, said “Wholly transforming the Museum would have been a tremendous achievement at any time. Undertaking and completing the work through lockdown is a breath-taking achievement by all those involved. The Dorset Museum now tells stories of Dorset and its 250 million years old heritage for all our visitors whom I hope will find enjoyment, fun and some wonder in the stunning new exhibitions.”