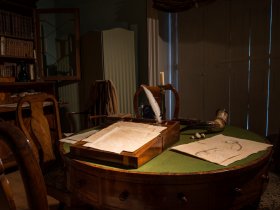 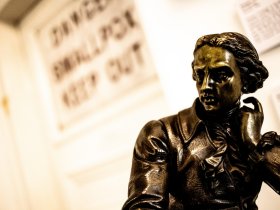 Tucked away on a quiet lane in the Gloucestershire market town of Berkeley, you might not expect this Queen Anne house to have been at the centre of a scientific revolution. And yet events which took place here over 200 years ago continue to shape our world today and have taken on particular relevance over the past year. This is Dr Jenner’s House, the lifetime home of vaccine pioneer Edward Jenner.

Between 1796 and 1798, country doctor Edward Jenner carried out a series of carefully planned scientific experiments demonstrating that infection with the mild disease cowpox would provide protection against the feared smallpox. After publishing his findings, he devoted the rest of his life to telling others how to carry out this lifesaving technique, which soon became known as vaccination, after the Latin vacca for ‘cow’.

In 1801 Jenner wrote that, “The annihilation of the smallpox . . . must be the result of this practice” and in 1980 the World Health Assembly announced that Jenner’s hope had been realised: smallpox had been eradicated. But the story doesn’t stop there. Other vaccines, building on the work of Jenner and those who came before him, now save between two and three million lives worldwide each and every year.

The first museum celebrating this extraordinary life and legacy was opened in the 1960s in the cottage given by Jenner to James Phipps, the subject of the first experiment, in recognition of his crucial role. In 1985 we moved to our current home, the Chantry, Jenner’s residence from 1785 until his death in 1823, after an international fundraising appeal succeeded in enabling the purchase of the house.

In 2019 our 7,600 visitors were able to see objects telling the story of vaccination from its early beginnings, a cow’s horn polished by Edward Jenner himself and copies of the publications that shared his work with the world, to the final days of the global smallpox eradication campaign led by the World Health Organisation. Jenner’s study, where he spent hours every day keeping up with his international correspondence, has been carefully recreated, and hidden away at the top of the garden is the Temple of Vaccinia, where Jenner vaccinated people from the local community free of charge.

In recent years there has been a period of change and renewal for the Jenner Trust, the independent charity which cares for Dr Jenner’s House and its collection. In 2014 it was re-established as a charitable incorporated organisation and in 2019, with the support of the National Lottery Heritage Fund, we undertook a strategic review culminating in an ambitious new Forward Plan.

As we now begin delivering this plan, we hope to achieve a more sustainable model for our work (currently over 70% of our income comes from visitor admissions) and, recognising the challenges of our location, broaden our public engagement, working in partnership with like-minded organisations to ensure that our story can be told outside the walls of the building.

This is an ambitious plan, and the Chantry will require significant and sustained investment to achieve it, but we truly believe that it will be worthwhile. If we can inspire and encourage people to acquire knowledge and make discoveries as Jenner did, then, like the pioneering
country doctor himself, we can start the conversations that might just change the world.