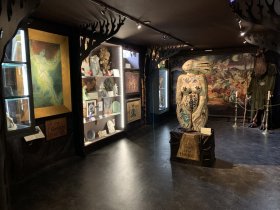 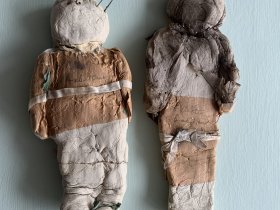 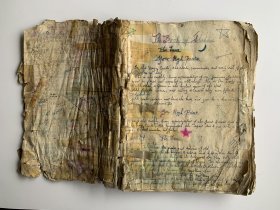 The Museum of Witchcraft and Magic first opened its doors in 1950 and has been enchanting the public ever since.

Now tucked away in the harbour village of Boscastle, the museum’s founder Cecil Williamson originally opened the museum in Stratford upon Avon in 1947, but due to objections from the local religious community, it wasn’t until 1951 that the museum was able to set up properly in a series of buildings attached to a ruined mill in Castleton on the Isle of Man.

Williamson was a colourful character: a film director, spy for MI6 and a magical practitioner. His large collection of magical objects was later added to when Gerald Gardner joined him at what was now known as the Witches Mill and was installed as the resident witch. Gardner was in the process of founding the neo-pagan religion, Wicca, later to be known as Gardnerian Wicca.

Both strong characters, they eventually fell out and Williamson moved, along with his collection and wife Gwen, to the mainland in 1954.

After several ventures on the mainland, each meeting with some hostility, Williamson finally settled in a two-storey building in the harbour at Boscastle, where it opened as The Witches House in 1960 and where it has been ever since.

The next Director of the museum was Graham King. During a walk in the English countryside in 1996, he encountered and was made welcome by a group of early road protestors, the Dongas Tribe, gathering to celebrate the ancient Tan Hill Fair. It was this encounter that set in motion Graham’s decision to leave behind his previous life, leading to his purchase of the Museum from Cecil Williamson.

Graham made the 200-mile journey on foot to Boscastle, where at midnight on the 31 October that same year the purchase was finalised. Graham and his team went on to develop The Museum of Witchcraft into one of Cornwall’s most popular museums, which passed into the hands of present Director Simon Costin in a similarly theatrical way at midnight on 31 October 2013.

The museum has remained independent and receives no public funding at all, with income coming from door takings and shop. Pre-pandemic it welcomed around 49,000 visitors a year and the MWMʼs Instagram following is the envy of many much larger museums. When Covid 19 hit, it was the social media following that became the museum’s front window through which it maintained and grew traffic to the Museum shop, a lifeline during the 18 months of enforced closure. The small and devoted team became experts in online retail. Along with the museum’s director the museum employs four members of staff throughout the year.

During Covid the MWM has gone through a period of rapid change; it has deployed an online booking system for the first time and installed new air purifiers, whilst raising the entry price for the first time in ten years. We launched a hugely successful magazine, CONJURATION, which has its own website. Selling out the first edition in 16 minutes was an experience the team will not forget! A new Patrons Scheme, replacing and building on the successes of Friends of the Museum, launches in in 2022. A sell-out London exhibition for the MWMʼs sister museum, The Museum of British Folklore, bodes well for MWMs own London debut, scheduled for Winter 2022-2023 which will see it partnering with a London Museum for the first time in our history.

With over 4000 objects in the collection, the MWM aims to explore British magical practice, making comparisons with other systems of belief, from ancient times to the present day. With the objects in the collection and a library of over 7000 books and manuscripts the museum is the main repository for artefacts relating to many of the most important figures of 20th and 21st century occult practice, folk magic, and magical thought in general.