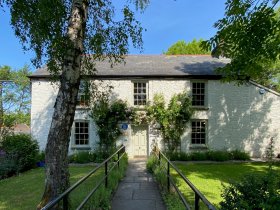 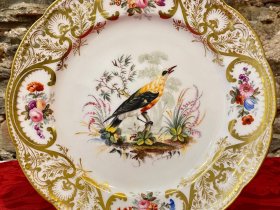 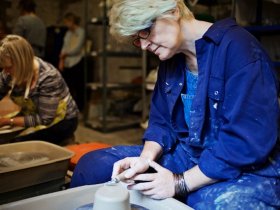 When we think of the Welsh Valleys our thoughts generally turn to male voice choirs, Tom Jones, rugby and of course coal – the black gold that fuelled so much of the industrial revolution and left an indelible mark on the landscape, prosperity and culture of Wales.

However another precious commodity, known as ‘white gold’, was made in the area and eagerly coveted by Royalty, politicians and the richest in the land. Nantgarw porcelain, developed at the start of the 19th century by William Billingsley is revered as the finest porcelain made in the UK and among the finest in the world; plates can change hands for tens of thousands of pounds.

Yet the fragility and difficulty of firing this remarkably white and translucent porcelain in the bottle ovens led to losses of up to 90% and the closure of the factory after only four years. Ironically the factory spent the next ninety years making earthenware jugs, flowerpots and up to 10,000 clay smoking pipes a week – making it the largest pipe making factory in Wales and a far more financially successful business than during porcelain production.

Today the original site houses Nantgarw China Works & Museum, an independent museum run by a charitable trust, which also operates as a pottery, arts centre and educational resource for the local community.

Over the past five years the Museum has gained significant growth in visitor numbers, retail activity and educational programmes while at the same time developing one of the largest public displays of Nantgarw porcelain, transforming interpretation and tours and creating ambitious plans for the preservation and expansion of the original China Works.

Much of the site, including the only remaining bottle ovens in Wales and traces of the Glamorganshire canal, is a Scheduled Ancient Monument. A recent Conservation Management Plan has identified priorities for conservation and possible future. Other buildings on site have already been restored and are used as ceramic studios by our resident ceramicists and to run over 400 workshops a year.

In 2017 the museum succeeded in recreating the lost recipe for Billingsley’s original Nantgarw porcelain – an incredible achievement that saw widespread media coverage and an appearance on the One Show.

This is the first Nantgarw porcelain made for two hundred years and the only softpaste porcelain in production in the world. All the processes involved from making the porcelain body from raw ingredients, creating traditional plaster moulds, slipcasting, glazing and decorating are performed on site and are part of the visitor experience. Nantgarw is back making world class porcelain.

A 2019 grant from the Weston Loan Programme with Art Fund enabled a significant number of items of Nantgarw porcelain to be loaned from Amgueddfa Cymru – National Museum Wales. Combined with other loans and acquisitions the Museum now has a world class display of Nantgarw porcelain complemented by later earthenware, pipes and artefacts.

As the Museum receives no core funding its income is dependent upon being open for visitors. During the COVID-19 pandemic the site has been open for less than 10% of the time and we have had to develop a strategy to ensure its viability. Retail operations, previously all conducted onsite, have been moved online and pre-COVID retail targets have already been exceeded. Campaigns to boost membership and donations have also helped replace lost income as have the various government grants on offer. We are deeply grateful to these and the Federation of Welsh Museums. Porcelain production has continued throughout.

Our philosophy is very much geared towards the Museum preserving Nantgarw’s rich heritage but also ensuring that the porcelain and site still have relevance today. This is achieved by producing world class contemporary porcelain, transferring skills to the next generation and providing an environment for skilled artists and craftspeople to develop their skills and earn a living. Whilst this last year has been unbelievably frustrating, we believe that we can emerge from it stronger and more resilient.