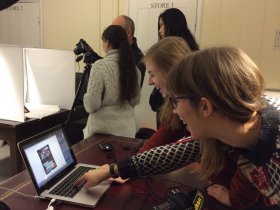 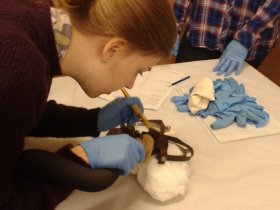 The Royal Fusiliers (City of London) Regiment was raised at the Tower of London in 1685 at the order of King James II. By 1689 the Fusiliers had become a regular Infantry Regiment, going on to fight in some of the most important conflicts in history; the most significant of which are retold within the museum including the American War of Independence, The Napoleonic Wars, The Crimean War, the First and Second World Wars and the Korean War. In 1968 the Regiment was amalgamated with the three other English Fusilier regiments to form The Royal Regiment of Fusiliers, who continue to serve across the world.

As part of a previous project the museum received funding to create a new storeroom. The aim of the collection move project has been to relocate material from the basement into this new purpose designed store. The project also aims to improve the long-term care and preservation of the collection, to gain a better understanding of the material that has been collected, as well as to improve the cataloguing. Other big aims of the project were to condition check and photograph the collection material; things which had never previously been done. We are also beginning to populate the museum’s online catalogue to fulfil the aim of sharing more of the museum’s collection with a wider audience. The funding from AIM covered many of the material costs of the project, without which we would not have been able to achieve the aims set out.

The project was primarily run by one member of staff with the support of a core group of three to six volunteers. The Coronavirus pandemic has halted progress for the time-being, but we hope to be able to finish the project next year.

With AIM’s support we have been able to spend time improving the quality of our cataloguing and the storage of the collection. Both of these elements are integral to sharing a greater proportion of the collection with a wider audience, to making the Fusilier collection more accessible to all and to creating exciting new projects in the future with the knowledge gained from this project.