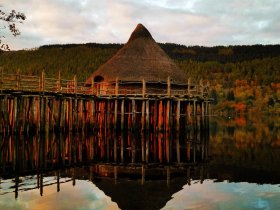 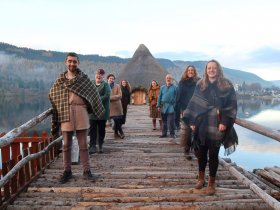 Striding into the future with confidence

The replica at the heart of the Scottish Crannog Centre was destroyed by fire in June this year. Yet, as Managing Director Mike Benson explains, innovation, strong partnerships, community support and teamwork have laid the foundations for a bright future, recently recognised by winning a Museums Change Lives award.

Archaeologist divers from the Scottish Crannog Centre Trust have been exploring Loch Tay since 1980, and the Centre’s first recreated loch-dwelling was based on excavation results from the 2,500-year-old Oakbank Crannog.

Accredited in 2017 and with staff at 22 FTE and 50-60 volunteers, in 2019 the Centre welcomed a record 26.5k visitors. Figures, Managing Director Mike Benson told AIM, they expected to exceed in 2020 until the pandemic struck.

But it’s not just growing visitor figures that demonstrate the growing success of the Centre. A commitment to driving change through strong partnerships is also gaining wide recognition.

“We’re based in Scotland’s most deprived area for access to training for young people, so the museum is playing its part in putting that right. We started an apprenticeship programme in August and are now accredited, so we can train our own. The scheme is used as an example of best practice and our basic principle is that if you’re serious about engaging with diverse audiences, you need a diverse workforce. We’re also working with young people with autism, co-designing a week’s work experience that will be rolled out across the region, not just in museums, but the whole business sector.”

The organisation has been seeking a more suitable location since 2002, recently settling on Dalerb, just along the loch. Detailed negotiations with the Scottish Government and the local authority followed, hard work that paid off early this summer, as Mike explains.

“The Minister decided to sell us the land for £1; it was a massive result, gave us a lift and re-energised everyone to keep going through the pandemic. At 11 in the morning on Friday 11 June, we finally got the paperwork through, telling us the land was ours.”

That evening however, another challenge unfolded.

“At 11 o’clock that night on the CCTV footage you can see a little glow inside our thatched building.

By six minutes past, it had gone.”

In a tearful staff meeting on site late that night, the team processed what had happened and expressed their determination to move forward.

“I said this is not going to be the end of our story, it’s going to be part of it,” recalls Mike.

“If this had happened two and a half thousand years ago they would have blessed themselves nobody was hurt, picked themselves up and built a new home somewhere else. And that’s exactly what we’re doing. We couldn’t get an electrician on site to make things safe until the Wednesday following the fire, and on the Thursday we reopened. We’ve remained open ever since.”

The community response was instant, ‘humbling’ according to Mike. A local caravan park owner set up a Crowdfunder, still running on the Crannog website, raising almost £50k of the current £85k total within days, and the Scottish Government and Museums Galleries Scotland teams offered invaluable and immediate help.

“John Swinney, our MSP, and Scotland’s Deputy Minister was here on the Monday, and we’ve had visits from Culture Minister Jenny Gilruth too. Museums Galleries Scotland have been brilliant to work alongside, calling the morning after the fire and establishing a team to help.”

The situation has naturally accelerated relocation efforts, with planning submissions scheduled in February 2022 aiming for a June opening.

“Fortunately, we had put the time and effort in on the new site: starting talks, completing the first phase of the business plan and an early masterplan. We could evidence community support; MGS have called us a gold standard of museum practice. We’ve had a lot of pro bono help, too.

I feel we’re going to be striding into the future with confidence as ‘we’ve an armada of log boats behind us.’”

What advice would Mike offer to those feeling like they are facing crisis?

“There are always solutions. Take your time, take a breath. Know that you’re loved, and don’t be afraid to say when you need help.”